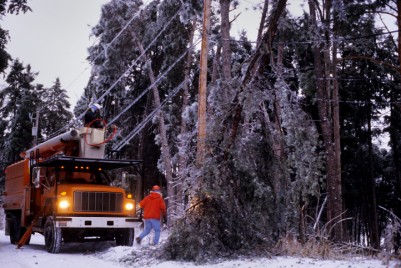 Extreme weather has become commonplace all over the world, creating more natural disasters every year.  High winds, ice storms and flooding take down trees and power lines causing outages and putting greater strain on our aging electric power grids. Communities in the U.S. and abroad rely upon electricity to maintain public safety, national security and a quality of life.

In order to provide essential services when an emergency strikes, advance emergency preparedness is crucial for cities and towns, first responders, emergency management teams and federal, state and local agencies.  Utility companies must provide power to their customers. The military requires electricity for missions in remote locations.  Millions of people in developing countries still have no access to an electric grid.  Business and industry often require off-grid and backup power for their operations.  Homeowners rely upon power for day-to-day living.

What is The Mighty Power System?

Typically, emergency generators are dependent upon propane or natural gas which can become unavailable during times of major disasters.  Not The Mighty Power System, which safely operates entirely on electricity created from solar energy and batteries.

The solar electricity generated by The PPG charges The Mighty Box batteries during daylight hours, maintaining optimum battery power around the clock.

Advantages of The Mighty Power System

Designed for rapid deployment, The Mighty Power System can be easily and quickly moved from location to location powering critical sites and devices instantly.  No special tools, training, ground conditioning, extra onsite extensive material handling or warehousing is ever needed.

An ideal resource for installations on utility and municipal brownfields, the unique transformational design of The PPGs provides added value by creating traditional solar PV installations of any size feeding electricity into the grid with traditional inverters.

When the crisis passes, PPGs are returned to their home site installation again making power into the grid and Mighty Boxes are returned to storage maintaining 100% power by AC connection to built-in trickle chargers while awaiting future deployment.

The Mighty Power System is designed for ease of use in all applications when and where emergency and off-grid power is needed.

There is nothing else like it under the sun.